The slam is a four-day festival including readings, workshops, side slams and the Regional slam for teams and independent poets.

This guide was adapted at the 2004 Southern Fried Slam Masters (SM2004) meeting.

Amendments made at subsequent SM meetings are included and noted. 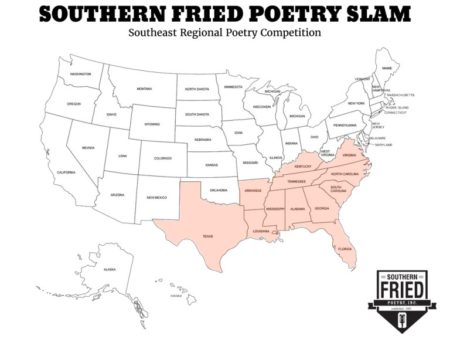 The Regional slam is conducted in three preliminary rounds and a final round.

Preliminary rounds are divided into bouts of three or four teams.

A. Before each bout a representative from each team meets with the bout manager to draw team order. The letters A, B, C (& D in the case of four team bouts) are written on folded paper and drawn by the representatives. Independent poets also draw for order using numbers 1 & 2.

B. This is the order of team performances:

C. Each team is represented by one of its 5 poets each rotation in the round. A poet on a team may be represented only once in each bout. A team may choose to perform a team piece if the poet represented is the (or one of the) primary author(s) of that poem. That poet would lose his/her individual ranking for the duration of that festival.

D. The scores of all poets on each team  are added together to get each team’s cumulative score. The team with the highest cumulative score is the winner of the round and gets a ranking of 1. The second place team gets a ranking of 2, etc. In the case of a tie, both teams get the rank and the next lowest rank is dropped. For example, if two teams tied for 1st place, there would be 2 teams ranked 1, and a ranking of 3(and 4) for the remaining team(s).

E. Each poet’s score is also ranked and each poet is given a rank for the round. Ties are handled the same way as with teams.

G. Any protests of rules violations should be brought immediately to the bout manager’s attention for resolution or to be referred to the protest committee. The person(s) protesting must know and be able to state the violated rule.

I. Mulligan Rule (the do over): In the event that a major disruption causes a bout to come to a stop before the end of a rotation, and if continuing the rotation would cause some teams to perform under very different conditions than others within that rotation (such as, but not limited to, the loss of two or more judges so that some teams in that rotation would be judged by a substantially different group of judges), then the majority of Slam Masters and/or team captains competing in that bout may decide to start that rotation over by a majority vote if two or more of the SM/captains call for a vote, or if one SM/captain and the Bout Manager call for a vote. This rule is not intended to be used for technical difficulties such as a microphone malfunction. The Bout Manager is the tiebreaker in the event of a tie. ***Poems performed during the nullified portion of the affected rotation may be repeated as if they had not been performed at that SF. There may be no more than one Mulligan per bout.*** (SM2010)

J. Sacrificial Poem (calibration poem): Before each bout begins, a sacrifice poem will be performed by a poet not in the competition in order to give the judges an example of a slam poem which the judges may use to compare with the poems which will follow in the round. The sacrificial poet cannot be affiliated with any team competing in the bout. The BM may present the sacrifice performance if no other qualified poet is available.

Also, in the event that two or more judges must be replaced, or the Mulligan rule is used, the MC and BM will restart the rotation with another sacrificial poem from the beginning of the rotation. (SM2022).

Scoring is cumulative for all teams and individual poets.

The prizes will include a case of RC Cola and a case of Moon Pies each for the team and individual champions.

Prize money is to be determined by Southern Fried Poetry, Inc.

The Protest Committee is tasked with resolving alleged rules violations by poets and/or teams during competition. The committee consists of three persons and will be named before the competition to resolve protests. The members of the protest committee should be introduced at the team introductions before competition begins.

A. All poems performed in competition must be the original work of the performing poet. Poets can sample up to thirty (30) seconds of work from another artist.
B. There are no props, musical accompaniment or costumes allowed during poetry performances.

Props: Poets may use whatever is on stage and available to all poets while performing (for example, getting on top of a chair is not using a prop as long as all performers have access to it). Performers should be careful not to put on or take off clothing while on stage as this could be considered a prop violation.

D. Time Limit: Poets have a 3-minute time limit with a 10 second grace period. After 3:10 a poet’s score is penalized .5 points for every 10 seconds over the time limit. During final rounds, the grace period will be 20 seconds.

A. Judges must be impartial and not related to or in the entourage of any competitors in the festival.
B. A diverse range of judges is preferred.
C. A person who is employed by the venue and currently on the clock may not judge.
D. Poems are judged from 0.0 to 10.0, with a single decimal point encouraged as a tiebreaker.
E. Five judges are chosen per bout. For every poem scored, the high and low scores are dropped and the remaining three added together for that poem’s score.
F. Before the bout begins judges meet with the MC and are warned about score creep, asked to be consistent and given an opportunity to use a sacrifice poem to practice scoring and to use as a base score.
G. Before the beginning of any bout, a representative from each team will be introduced to the judges and given an opportunity for each team to veto one judge. Teams are reminded that judges are chosen from the audience available.
H. Judges are chosen by the Bout Manager and/or MC.

VII. Host of Prelims and Finals

MCs must be impartial and careful to support every poet’s performance equally. Keep the energy high. Each MC and BM should be a veteran of SF.

A SlamMasters meeting is held the morning after round one to resolve any difficulties, decide on any rules changes and decide where the next Southern Fried will be hosted.

A. A host city is chosen two years in advance (SM2005).
B. A host city must be within boundaries of the southeastern region as defined by these rules, unless no such city offers a bid to host (SM2017).
C. Voting SlamMasters include all SMs from southeastern slams and those SMs from slams outside the region who have attended three consecutive years. On the third year, that team’s SM may vote (SM2005).
D. In the event that SM business conducted between festivals requires a vote, the voting Slam Masters will be those who attended the most recent SM meeting, and such attendance will be proven by the sign-in sheet from that most recent SM meeting.

At the SM2016 the Southern Fried Advisory Board (AB), now Southern Fried Poetry, Inc Board Members, was created for the purpose of assisting and directing the Festival’s transition between host cities with an eye toward maintaining SF Festival spirit and traditions.

A. Southern Fried Poetry, Inc was established as a 501c3 non-profit organization in 2016.
B. The Slammasters voted to implement our first Board of Directors. Effectively, the six advisory members were chosen as an initial board: Akin “Shadow” Sawyerr, Adam “Henzbo” Henze, Kirk Hardesty, Inkera Oshun, Ebony Payne, Dasan Ahanu, with a seventh member to be decided later. Members of the board have agreed to serve fora minimum two (2) years, agreeing that in the first year, no member will make money from per diems or contracted work from the organization. (SM2017)

C. The SMs elected to make Southern Fried Poetry, Inc a membership based organization. Members wishing to participate in the tournament and other programming will be responsible for a personal 20-dollar-a-year membership fee, before they can compete in the tournament. Future membership perks will unlock special content on the website and other networks and make members eligible for other discounts. (SM2017)

Tournament Director (SM 2007) The TD is chair of the Tournament Committee and given the responsibility of oversight of the tournament portion of the Southern Fried Poetry Festival.
A. The Tournament Director (TD) is elected by majority vote of the Southern Fried SlamMasters (SMs) at the annual SMs meeting.
B. The TD has veto authority over selection of Bout Managers and MCs and will provide for the training and instruction of BMs and MCs before the first bout.
C. The TD is responsible for ensuring scoring accuracy and timely posting of scores and rankings.
D. The TD is responsible for approving the venue for the Final Round of the Poetry Slam.
E. An assistant TD will be appointed by the TD and given responsibilities as needed (SM 2022).

A. Each team must contribute one volunteer to perform one bout duty during at least one bout during the contemporary tournament (SM 2017).
B. The Lake Eden Art Festival’s Poetry Slam is a sister slam, named the Southern Fried LEAF Poetry Slam for individual poets (SM 2012). SF LEAF is a one day event held in the Fall and Spring during LEAF. There is a qualifying round and a final round. The top twelve qualifying poets compete in the final round. The winner of each SF LEAF will be given an Individual slot at the next Southern Fried.
C. The team which places last at SF will be awarded the Spirit of Southern Fried on the Finals stage before Team Finals begins (SM 2012).